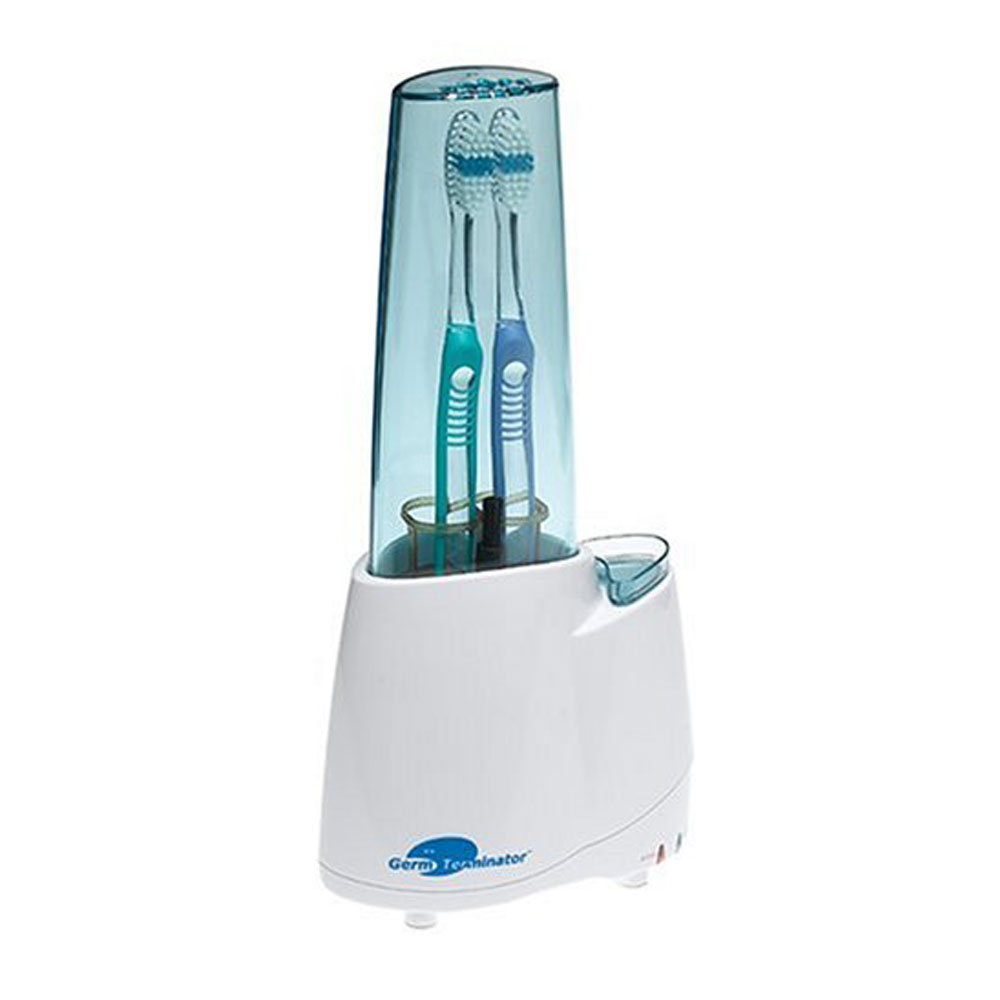 You’ve heard about it on television!

The GT100 is incredibly easy-to-use and is designed to protect your long-term health by terminating the germs that breed on your damp toothbrush.

Watch It In Action Now!

A Report of the Surgeon General

On May 25, 2000, Surgeon General David Satcher released Oral Health in America: A Report of the Surgeon General, the 51st Surgeon General’s report issued since 1964, when Luther Terry issued his landmark report on tobacco and health. These reports have helped frame the science on vital health issues in a way that have helped educate, motivate and mobilize the public to more effectively deal with those issues.

The Journal of the American Dental Association:

“Studies have shown that contaminated toothbrushes not only harbor, but also transmit both viruses and bacteria that cause systemic, localized and oral inflammatory diseases.” ( September 2001, Vol. 132, The effects of toothpastes on the residual microbial contamination of toothbrushes )

The Centers for Disease Control:

“Even after being rinsed visibly clean, toothbrushes can remain contaminated with potentially pathogenic organisms.”

“The sharp tips of toothbrush bristles can cause tiny lacerations in the gums that allow infections to enter the body.”

Your toothbrush may be a biohazard)

The Journal of the Canadian Dental Association:

The New Haven Department of Health:

“Laboratory cultures made from used toothbrushes have shown many dangerous pathogenic germs.”

The Academy of General Dentistry:

“Because most families store toothbrushes in a common storage space, airborne bacteria can move from toothbrush to toothbrush, passing opportunistic infections such as periodontal disease and the common cold from one person to another.”

The Journal of Dentistry for Children:

“Streptococcus and pathogenic microorganisms can be transferred readily when a toothbrush is used, increasing the risk of dental caries and infectious diseases.” ( May-June 1989; 56(3): 201-4, Residual contamination of toothbrushes by microorganisms)

“It may surprise you, or sicken you, to know that if your toothbrush is stored near the toilet, the chances are great that it is covered with E. coli bacteria. Each time you flush the toilet, bacteria disperse in the air in the form of tiny aerosol particles that can land on any surfaces within 6 feet.” ( 2002, Rodale Inc., p. 270, Thompson, Kimberly M., Overkill: How our nation’s abuse of antibiotics and other germ killers is hurting your health and what you can do about it)

Microscopic cuts in our gums and tongues, often caused by sharp toothbrush bristles, may be extremely dangerous “portals of entry” for destructive concentrations of bacteria, viruses, fungi, molds, and yeast that can rapidly breed on our toothbrushes. This invasion of toothbrush-related germs into our bloodstreams may spread infections throughout our bodies, placing constant stress and strain on our immune systems.

These mouth-related germ infections have been consistently associated with “diabetes, cardiovascular disease, stroke, and adverse pregnancy outcomes” (Oral Health in America: A Report of the Surgeon General, September 2000).

There are no reviews yet.

Super Dental Store is committed to helping you create the smile of a lifetime with our wide catalog of excellent dentist recommended products. We buy, store, and ship everything ourselves. We also have a tremendous team of people who are efficient and committed to providing the excellent service that our customers have come to expect.